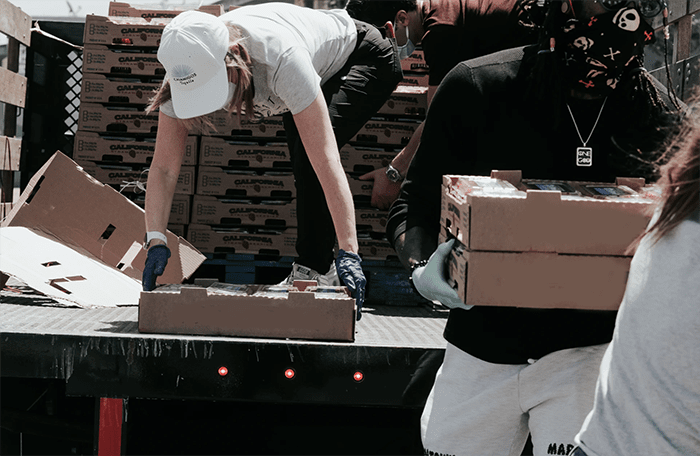 LOS ANGELES, CA — As the ‘safer at home’ orders lifted in May and June, many across Southern California thought coronavirus was largely contained, and they set about visiting friends and family, bars and barbers, unknowingly setting off the surge in new COVID-19 cases that prompted another round of closures in July.

It was a strange, collective disconnect: conditions felt better, but the outbreak was getting worse.

Now, Air Force medical staff have been called in to help overwhelmed Los Angeles hospitals as new case numbers and hospitalizations teter at dangerously high levels. But, once again, there may be a disconnect between the number of cases and the rate of the spread of COVID-19.

The caseload is high, but the spread may be slowing, officials hope. Positive test rates continue to drop in Los Angeles, and people with coronavirus appear to be spreading the disease to fewer people than they were a month ago.

Los Angeles County confirmed more than 50 additional coronavirus deaths Tuesday, along with more than 2,700 new cases, as a backlog in testing results from the state slowly began to clear.

The Los Angeles County Department of Public Health announced 51 fatalities due to the coronavirus, while health officials in Long Beach reported five and Pasadena added one. The new fatalities lifted the countywide death toll from the virus to 4,432.

A total of 2,708 new cases were reported by the county, along with 313 by Long Beach and 21 from Pasadena. As of Tuesday afternoon, the countywide number of cases confirmed since the start of the pandemic stood at 178,976.

County health officials said a backlog of testing results being reported by the state’s electronic lab system was skewing the numbers, and they expected that backlog to clear over the coming days.

Data-reporting was also affecting the number of people listed as hospitalized due to the virus. The county on Tuesday reported 2,051 confirmed cases in hospitals — not including Long Beach and Pasadena — with 29% of those people in intensive care units.

Those numbers, however, did not include data from three hospitals, county officials said, indicating the actual number of people hospitalized is likely higher.

Still, county health officials have been cautiously optimistic in recent days about the data trends, suggesting that while the pandemic is still raging, key metrics such as testing-positivity rates and hospital admissions appeared to be leveling off, suggesting progress is being made in slowing the spread of the virus.

Public health director Barbara Ferrer on Monday stressed that if residents continued following infection-control measures such as physical distancing and wearing face coverings, the numbers will continue to improve. She reiterated that belief Tuesday.

“As individuals, and as a community, we must collectively commit to continuously practice the behaviors that slow the spread of COVID-19,” she said in a statement. “Compliance with public health directives, containment of the virus, and collaboration across all sectors is key for us to move into the long-term recovery that we all want to see happen as soon as possible.”

Ferrer on Monday stressed the importance of business owners adhering to public health directives and reporting any outbreaks among employees. She said three more local businesses were ordered closed this week due to large- scale outbreaks and failure to comply with operating protocols.

The agency is clear in the directives, “but manufacturers have to protect their workers. It’s unconscionable, it’s not moral, to have workers exposed because they’re doing essential work,” Ferrer told NPR.

Golden State Foods Corp. in Industry had 43 confirmed cases of the virus, according to Ferrer and the county’s website. S&S Foods in Azusa had 58 cases. Mission Foods in Commerce had 40 cases.

Last week, county officials confirmed that Los Angeles Apparel, site of the county’s worst COVID-19 outbreak — with four deaths and about 375 confirmed cases — was allowed to reopen its clothing factory in South Los Angeles after making changes in training and infection-control measures.

The county had earlier promoted avoidance of “three C’s”: crowded places, confined spaces, and close contact with others. On Monday, Ferrer rolled out another “three C’s”: compliance, containment, and collaboration, all aimed at urging adherence to control measures such as wearing face coverings and physical distancing, along with stepped-up testing and cooperation with contact tracers and working collaboratively across all sectors of government and business.

“Our businesses and our employers must also do their part, and they’re required to alert us to any outbreaks at their worksites,” Ferrer said. “Employers remain key to ensuring that we can move forward in our recovery journey.”

She also stressed that younger residents are driving the recent increase in cases, noting that since May, the majority of new cases have occurred in people aged 18-49. She said the 18-to-29 age group “is accounting for a sharply increasing percentage of cases,” while “all the other age groups are either flat or decreasing slightly.”

It’s that younger group that can be increasingly difficult to reach, with officials noting in recent weeks that younger residents are more likely to be gathering in groups, holding parties, or generally believing they are not vulnerable to the virus.

Ferrer has repeatedly warned that while young people may not be in danger of falling dramatically ill due to the virus, they can easily spread it to people who are.