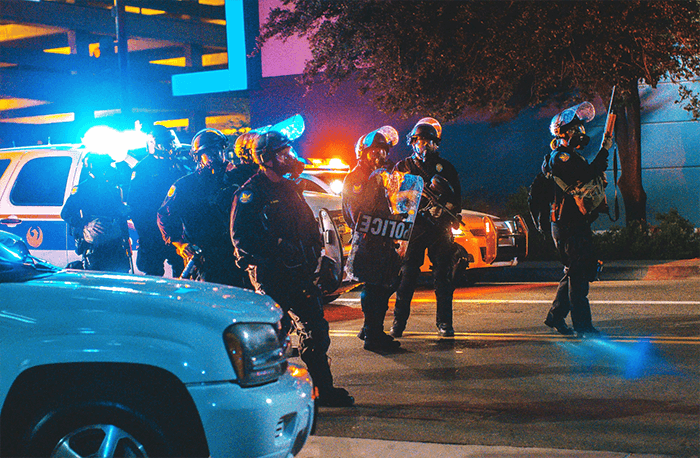 GARDENA, CA — Authorities are investigating the fatal police shooting of an 18-year-old security guard near Gardena after the victim’s boss claimed deputies pulled their guns on the young man, scaring him and sending him running before firing on him.

Amid a climate of national unrest over the police killings of people of color, Peneda’s shooting triggered an immediate backlash. A protest against “L.A. County sheriff’s terrorism in Black and Brown communities” was planned for Friday afternoon at the scene of Pineda’s death.

Thursday’s incident began when deputies from the Compton Station spotted him while patrolling the area, Lt. Charles Calderaro told reporters at the scene.

“Deputies engaged in a short foot pursuit between the two businesses,” Calderaro said. “At some point, deputies contacted the suspect, and that’s when the deputy-involved shooting occurred.”

Pineda was struck by gunfire in the upper body and pronounced dead at the scene, Nagao said. No deputies were injured. Only one deputy fired at him, and it was unclear if the suspect fired at deputies, the department said.

According to KCAL9, the fatally wounded man worked as a security guard at Freeway Body Shop, 420 W. Redondo Beach Blvd., near where the shooting occurred.

The owner of the shop, Andrew Heney, told the station he could not understand why the young man was shot.

“We had security out front because we had certain issues with people tagging and stuff like that, and then the police come up and they pull their guns on him and he ran because he was scared and they shot and killed him,” Heney said.

“He has a clean background and everything, there’s no reason (for the shooting).”

The fatally wounded man was not wearing a security guard uniform at the time deputies spotted him, and a gun was recovered at the scene, Calderaro said.

Investigations by the Sheriff’s Homicide and Internal Affairs bureaus were underway, as is policy whenever a deputy-involved shooting occurs.

The shooting is the second fatal shooting by Los Angeles Sheriff’s Department deputies within a day. A half-brother of Robert Fuller, whose body was found hanging last week from a tree in Palmdale, was killed in a shootout with deputies on Wednesday. That officer-involved shooting is also under investigation.

Friday evening’s demonstration will be organized by Union del Barrio, the Harriet Tubman Center for Social Justice, and “various other community-based organizations,” the statement said, adding: “Our demands will be: 1) Justice for Andres Guardado and his family! 2) Jail for all killer cops and sheriffs. 3) Community Control of the police/sheriffs.”

Anyone wishing to attend the demonstration will have to use a facial covering and maintain social distancing, the statement said.