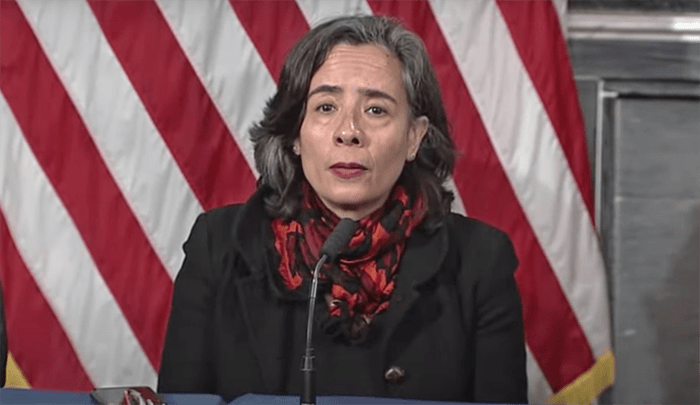 Oxiris Barbot, who led the city’s efforts against the coronavirus, submitted her letter of resignation to Mayor Bill de Blasio, NY1 first reported.

De Blasio said during a hastily-organized news conference that he received Barbot’s resignation that morning.

“I want to thank her for the important work she did during this crisis,” he said.

The Mayor’s Office quickly sent out a news release stating Dave Chokshi will take over as commissioner of the city’s Department of Health and Mental Hygiene.

Barbot, a pediatrician, became a familiar face to many New Yorkers as the pandemic gripped the city. But her appearances dropped off amid reports of infighting with other agencies, particularly a high-profile tiff with the NYPD.

NYPD brass tried to commandeer 500,000 masks for officers at the pandemic’s peak, prompting Barbot to tell a top cop, “I don’t give two rats’ a–es about your cops.”

Barbot later apologized but calls for her resignation or firing continued.

The New York Times reported that Barbot’s resignation email to de Blasio expressed “deep disappointment” that the city cut the health department out of aspects of the coronavirus response.

The city’s “Test and Trace” program is administered by its public hospital system, not the health department.

Barbot alluded to the decision in the letter quoted in the Times.

“I leave my post today with deep disappointment that during the most critical public health crisis in our lifetime, that the Health Department’s incomparable disease control expertise was not used to the degree it could have been,” she wrote, according to the Times.

De Blasio defended the decision to give the tracing program to the Health and Hospital system, saying its scale was better served by the hospital system. He said the next health commissioner had to be ready to start from “day one” as a potential second coronavirus wave looms.

“It had been clear certainly in recent days that it was time for a change,” he said.

Chokshi, a practicing physician at Bellevue Hospital, is just the doctor to lead the change, de Blasio said.

“I’m a primary care doctor with a public health heart,” Chokshi described himself.

Chokshi was raised in Louisiana as the son of immigrants. He is a Rhodes Scholar, served as a White House Fellow in the Obama administration, and as part of FEMA’s Hurricane Sandy delegation, according to the release.

He said he also lives within steps of Elmhurst Hospital, which became the face of the city’s struggles with the pandemic during its early days.

De Blasio said any tensions with Barbot and the health department didn’t affect the city’s response to the coronavirus. What really matters is the outcome, he said.