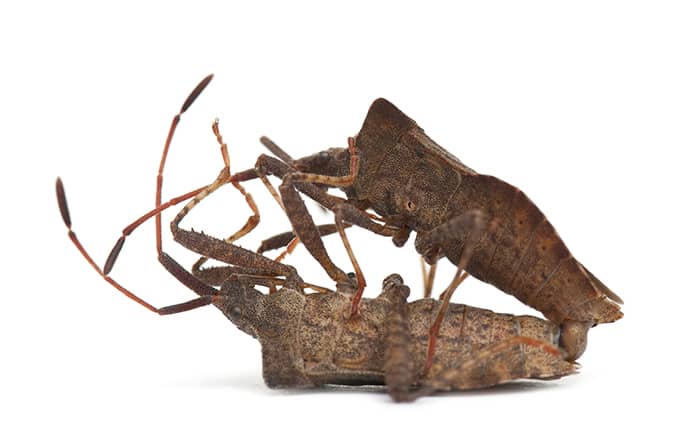 ILLINOIS — No matter how fitting a metaphor brown marmorated stink bugs may be for 2020, there’s no evidence the pests — known for their putrid odor — will crawl into your home in greater numbers than usual as cooler temperatures arrive in Illinois.

Of course, it is 2020, so there’s some bad news, too: As surely as the calendar turned to September, fall will arrive, and stink bugs will be looking for a place to freeload over the winter. You’ll recognize them by their marbled or streaked, or marmorated, appearance.

They’re noxious in ways other than their smell, which has been compared to rotting meat.

Found in Illinois and 45 others, stink bugs are an enemy to fruit growers. What they can do with those piercing, sucking mouthparts (sounds wicked, doesn’t it?) to an apple, peach, or pear orchard isn’t pretty.

Not every homeowner has a stink bug horror story like that of Pam Stone and Paul Zimmerman, who discovered 26,000 stink bugs invaded their home as the cool air of fall came to South Carolina. They had left doors open leading to a second-story deck outside their bedroom, and the stink bugs marched right in as if they owned the place.

The couple’s experience, hilariously recounted by Kathryn Schulz in The New Yorker, was “like a horror movie,” Stone said.

They were on every visible surface, and on many that weren’t visible. Squashing them wasn’t the answer, of course, because it’s when they’re threatened that stink bugs throw off that gawdawful smell. But when the couple carried some outside, more stink bugs flew in.

Finally, after 45 minutes, they thought their DIY extermination had worked. Nope. They heard one buzzing as it flew across the room to join its cronies hiding on the backside of a picture.

This went on for days, with Stone and Zimmerman finding them in the strangest places.

Stone, who is an actress, comedian, and horse trainer, sprang off her horse like she’d been catapulted when she discovered her saddle was crawling with them.

Your home may not be invaded by a horde of tens of thousands of stink bugs, as Stone and Zimmerman’s was. But a wildlife biologist in Maryland, entomologists in Virginia, and bank employees in West Virginia reported larger infestations — about a million in one place, according to one estimate — of the shield-shaped menace, The New Yorker report said.

When stink bugs feed on crops, damage can include everything from bruises and blemishes to aborted sweet corn kernels to a change in the sugar levels in some fruits.

Stink bugs damage ornamental trees as well as fruits and vegetables, and they pose such a threat that the U.S. Department of Agriculture funded the Stop the Brown Marmorated Stink Bug strike force. It’s a team of 50 researchers from 18 land-grant universities closely tracking the migration of the invasive, fast-moving pest.

On the home front, your best defense against stink bugs is to arm yourself with weather stripping, caulking, and tape, and make your home a fortress. Seal up gaps and crevices around foundations and any area where doors, windows, chimneys, and utility pipes are cut into the exterior. Any opening large enough for a stink bug to crawl through should be sealed.

The best thing to do if you find them inside is gently swept them into a bucket, then fill it with a couple of inches of soapy water. You could vacuum them up, but perhaps as a last resort because it will trigger stink bugs’ notorious odor and make your vacuum cleaner smell nasty.

Some companies recommend a special stink bug vacuum — a cheap, handheld model used only for that chore. The bag should be tossed in a thick, disposable trash bag and taken far from the house.

Poison can quickly kill the stink bugs, but that will also trigger their stench. Professional extermination is another option.

Or, Just Live With Stink Bugs or, if you can bear the thought of living communally with stink bugs inside your home, you could just leave them alone.

Their piercing, sucking mouthparts — tiny shields about a half-inch long and wide, which they curiously tuck between their legs when they’re not piercing and sucking the juice from plants — are not good for biting people. Stink bugs can’t sting you.

They don’t nest or lay eggs or reproduce. They don’t feed on anything or anyone in your house. They just move in to take a load off for a few months — scientifically, they enter a dormant phase known as diapause.

You’re unlikely to even know they’re there unless you do something to disturb them.

And then, lookout. Pee-yew. The stink bug will rouse in all of its valor.

But if you just leave them alone, they’ll crawl right back outside in time to take a bite out of your garden, and the war on stink bugs will begin anew.